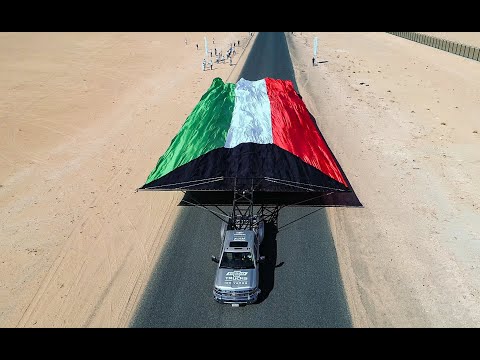 November 30, 2018: Chevrolet has consistently achieved success over the past years through participating in various challenges and competitions, aiming to break more records and attain new achievements. This time, the challenge happened in Kuwait. Chevrolet Alghanim registered another remarkable success and achieved a Guinness World Records title for the Largest flag flown by a vehicle after a Silverado 3500HD pulled Kuwait’s flag measuring 433 square meters for more than 100 meters without any part of it touching the ground.

This event is part of Yusuf A. Alghanim & Sons Automotive’s celebrations on the occasion of the 70th anniversary of its long-standing partnership with General Motors, which also coincided with the 100th anniversary of the launch of Chevrolet pickups.

Director of Corporate Communications of Alghanim Industries, Abdullateef Al-Sharikh said: "We’d like to dedicate this achievement to all Chevrolet Alghanim customers for their loyalty and trust. For more than 70 years, generations of customers in Kuwait have welcomed Chevrolet into their homes. Since the beginning of our relationship with General Motors, we have worked together to enrich our customers’ experiences. We look forward to achieving more milestones together.”

Senior General Manager of Chevrolet Alghanim, Abdallah Mouazzen said: "The strong Silverado 3500HD, which is also known as “King of Pickups", has been able to demonstrate its strong performance and ability through setting a new record with Guinness World Records. We are proud at Chevrolet Alghanim of the performance that all Chevrolet vehicles offer to our customers, and this year we are celebrating the 100th year anniversary of Chevrolet pickups”.

An adjudicator from Guinness World Records was present during the official attempt to make sure of the measurements and a successful execution has taken place before announcing the new record achievement.

The activity was also attended by many Kuwaiti young volunteers who took part of this activity by raising their national flag right before the kick off, and they were filled with the feeling of pride and happiness, especially after the announcement of the success of the attempt officially.

Long partnership and a year full of achievements

Since 1948, Yusuf Ahmed Alghanim & Sons, alongside General Motors, has ensured the delivery of high quality vehicles and services. And it has managed to win the GrandMasters award 13 times, an award that is presented to General Motors distributors that successfully and comprehensively elevate customer service on all fronts. This partnership between the two companies continues to grow and evolve through continuous investment in enhancing the customer experience starting from the point of sale, leading up to after sales services. Chevrolet Alghanim’s service center is one such example whereby it is the largest and most advanced in the world, providing its customers with a holistic car service experience, and the peace of mind and satisfaction that come with it.

Since its inception, Chevrolet Pickups have focused on creating the best vehicle possible to meet the needs of all its customers. And after manufacturing pickups specifically for its own establishments, Chevrolet produced its first customer-targeted pickup in 1918. And the pickup lineup at the time included two lightweight delivery pickups: the half-ton and the 1 ton. Both pickups were equipped with an open chassis behind the windshield, allowing customers to either purchase or design the chassis that best suits their needs.

A century and 95 million pickups later, customer needs remain the main driver behind the production of Chevrolet pickups. The Silverado specifically offers a wide variety of options in terms of truck body and trim designs, in addition to a full range of limited editions, enabling customers to choose from an array of options, leading up to the ideal vehicle that matches their needs and lifestyle.

Follow Us
Keep up to date with all the latest social updates from Chevrolet.
Back
Compare Saved Vehicles
Locate us
Top
Close